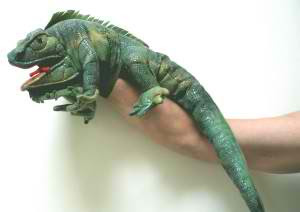 Isn't it neat to know that we all have lizards and furry li'l mammals living in our heads, running our lives?

Ok, maybe not exactly, but as we learn more and more about evolutionary brain science and evolutionary psychology, as well as gain more evidence about our amazing ability to rationalize and self-deceive, the analogy becomes less fantasy and more spot-on than we might imagine.

A person might be inclined to be a bit worried at the thought of scaly lizards and furry creatures running amuck, inside our brains. However, to me, this news is far from disconcerting. In fact, this knowledge gives me compassion to lighten up on myself and others when our "inner animal" or "shadow" nature, or "darkside" flares up, and wisdom about how to live my life in spite of being a human being with mismatched instincts in a world of supernormal stimuli.)

I invite you (yes YOU reading this post) to think about those times when you have felt deep shame and condemnation for certain aspects of yourself and others. You know the feeling, deep inside, that despises the part of you that you keep hidden from others? Those lustful feelings that you "shouldn't" be feeling, those food cravings that you just can't control? What if all those urges were actually perfect? Not as some "airy-fairy" new-age proclamation that "you're perfect just the way you are," but as an actual fact that modern science has uncovered?

What if this "dark" part of yourself that lusts and hungers out of control is actually perfectly adapted to serve an evolutionary role? What if that very instinct is the very reason you even exist? After all, if your ancient ancestors didn't have those very same instincts, they wouldn't have been motivated to seek as much food as they could in preparation for the famine, or go chase after the pretty cavewoman (well..."pretty" might be stretching it for a cavewoman :-). My friends, it's time to turn and give a big ol' hug to our "shadows!"

To me, that is what an evolutionary perspective provides: the ability to compassionately look at yourself and others, "flaws" and all, and KNOW that you are perfect...that is, perfectly adapted for the environment your brain evolved in, I should say.

To me, this knowledge has been personally and relationally transformative. I can now plainly see, often in the moment, the lizard, mammal, and monkey that are pulling on the levers and dials of my thoughts and actions, while my higher brain (neocortex) rationalizes every move and pretends IT is running the show!

Also, knowing that these instincts (for safety, sustenance, and sex) have refined and ingrained themselves for MILLIONS OF YEARS, I see what I am up against. The words "precautionary measures" start to seem like a really good idea...

After all, do I really think that if I try to fight against these urges, or condemn them, that they will be any less potent? Do I really think I don't have to put in place any structures to override these primitive urges (using accountability, social support, etc), that this lizard / monkey / animal won't get its way sometimes (or most of the time in all likelihood?)

Did I mention the CRAFTED OVER MILLIONS OF YEARS thing?

In terms of the oldest part of our brain (the reptilian brain)... When I think that, in effect, there is a little lizard (I call him Larry) inside the deepest part of my brain, who desires to eat sugary, fatty, salty food and wants to mate with every attractive female that he sees, it suddenly becomes dramatically easier to be one step ahead of him, while smiling at his wily ways.

Equipped with this knowledge about "Larry" and what he wants, compared to what I am actually committed to, instead of indulging his every whim I can now chuckle, make a joke about Larry's primal urges (often with my girlfriend, which is SUCH a gift to both have this knowledge), and move on with my day.

Also, regarding Larry's penchant for sugary, salty, and fatty foods, this knowledge allows me to put in place the support that will have me making wise nutrition and exercise choices (accountability around sticking with an exercise program, stocking my house only with 90% healthy options, so that Larry isn't tempted, etc).

I know that millions of years of evolution backing these urges for sugar, salt, and fat is nothing to trifle with!

To me, this understanding is vital for having exactly the kind of life I want and relationships that truly work. I now see plainly what inner forces are in me, what they are likely to pull me towards, and what I need to do or put in place to make wise, healthy, integrous choices.

P.S. I want to give a shout-out to my homey, "Larry the Lounge Lizard." You got me a long way ol' boy! But you can relax for now. I promise there will be food and fornicating in your future!

P.P.S. For more information about Larry and the other animals inside your brain, check out all the amazing resources on this page!

The above was written by Shane Dowd. (It's his very first blog post.) Click on Shane's name on this page for more background on him (and to see his gorgeous girlfriend).